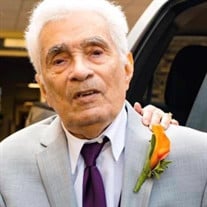 Angel M. Silva, 10/01/1938-02/24/2021, age 82, born in Guanica, Puerto Rico. He was happily married to Inocencia Silva nee Acevedo Garcia for 62 years. He was preceded in death by his parents, Josefa Miranda Crespo and Fernando Silva Valladares, sister Carmen Gloria Silva Miranda, brother David Silva, Daughter Rosa D. Rivera (Silva), Son In Law Jaime Rivera Morales, grandsons Jaime Rivera Jr and Ryan Jacob Silva. He is survived by his Children, Carmen G. Silva (Paul R. Silva), Angel M. Silva, Jr. (fiancé Elaine Jimenez), Nereida Silva, David Silva (fiance Luz Santiago), Jose D. Silva (SoraidaSilva Quiles), and daughter n Law Brenda Silva (Lannigan). 21 grandchildren and 35 great-grandchildren also survive him. Angel always went above and beyond for his family and others around him. Frequently, he fulfilled fatherly roles to many of his grandchildren. "Maximo" also participated in many of his granddaughters' weddings to give them away on their big day. His sharp wit and smile shined with all the people he met along his journey. Angel was a very dedicated father, grandfather, brother, uncle, and friend. He worked tirelessly to support his family until he was disabled at age 61. His best attribute was his love and affection for his wife through the years. He told her daily how much he loved her and that she was the love of his life. Visitation Wednesday, March 3 from 10:00 AM to 12:00 Noon at the FUNERAL HOME followed by a Funeral Service at 12:00 Noon. Interment Forest Home Cemetery. Rozga Funeral & Cremation Services Rozga-Walloch Chapel 4309 South 20th Street Milwaukee, WI 53221

The family of Angel M. Silva created this Life Tributes page to make it easy to share your memories.

Send flowers to the Silva family.