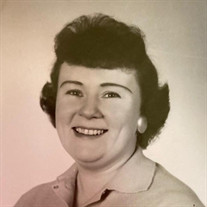 (nee Marunowski) Finally reunited with her "Moochie", Karol S. "Dobie" Dobson, on April 26, 2021. She was predeceased by her mother, Charlotte Marunowski (nee Sieczkowski). Bobie is survived by her beloved sister, Doris "Dorie" (the late Ernie) Jankowski. She was the most loving of Aunties to Laura (Craig) Powers and Anthony Jankowski, and Grand Auntie to Barbi, Matt (Janelle), Cory (Terry) and Nick Powers, Becca (Joe) Spiewak, Daniel and Stephanie Jankowski, and the Great Grand Auntie to Aiden, Aubrey and Xander Powers. She is also remembered by other relatives and friends. Bobie along with Dorie was raised in the Marble Arcade Bowling Alley family established by her mother, Charlotte in 1944. She was an accomplished bowler and meticulous bookkeeper always favoring the league bowlers with prize money based on numerous stats painstakingly recorded, calculated and typed. She was a bowling league promoter and organizer who enlisted teams from the many businesses and taverns the family patronized. She met Dobie, the love of her life, at one of these saloons. They married in 1961, honeymooned in Hawaii and Dobie officially joined the Marble family. When Dorie and Ernie started their family with Laura and Tony, Bobie and Dobie became the loving, generous second set of parents to them and their families. After her mother's death in 1972, Bobie and Dorie became co-proprietors and, together with their husbands, Dobie and Ernie, ran the business until the early '90's. Although the 50 years working in the Marble was the main focus of their lives, Bobie and Dobie made time to pursue their own interests. They were the perfect couple with never an argument and rarely a raised voice. They were inseparable. They continued to patronize the many local taverns. Although they loved Milwaukee and explored every new business and renovation, they frequently traveled. Vegas was their favorite destination visiting more than 60 times. They also went to Europe, Mexico, Caribbean and several times to Aruba. Bobie loved the theater and they were season ticket holders for decades beginning with the Melody Top and ending with the Marcus Center. They frequented many local theaters and even school show productions. In their later years they became frequent riders on Chip's Casino Tours, Badger Tours and High Rollers helping to support the midwest casinos. Dobie loved baseball and although Bobie no longer attended Brewer games with him she always followed the games on the radio and continued to cheer the Brewers on for him after he passed away. Despite the devastating loss of her Moochie, Bobie continued with her life but missed him every moment. She attended as many live theater performances as she could, donated and watched movies on "movie night", listened to "music under the stars" and participated in most activities with the Clement Manor Community. She always took every opportunity to raise a glass at the local gin joints. MARBLE CREW......YO-OOO!!! Visitation will be held Monday, May 10 from 9:30-11:00 AM at ST. ROMAN CHURCH (1810 W. Bolivar Ave, Milwaukee) followed by the celebration of Mass of Christian Burial at 11:00 AM. Interment will follow at Holy Cross Cemetery at 12:45 PM (Please meet at Nash Street Main Entrance).

The family of Barbara Jane "Bobie" Dobson created this Life Tributes page to make it easy to share your memories.

Send flowers to the Dobson family.