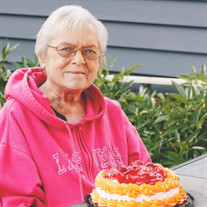 Barbara “Barb” Ellen Kay (nee Smith) was granted her angel wings on June 15, 2021 at the age of 72 after a courageous battle with Pancreatic Cancer. She passed peacefully in her sleep at Aurora Zilber Family Hospice. She spent her last days surrounded by family and friends who will continue to honor her legacy by living life to the fullest. Barb was born on September 7, 1948, in West Allis, to Harold and Veronica (nee Suchorski) Smith. When she was a little girl she used to dance in front of the hallway mirror, so her mom enrolled her in tap dancing lessons at Central High School. Barb attended Pius High School, where afterwards she received her license as a beautician. She worked at Velvet Touch (Touch of Genius) in West Allis and also worked at a beauty shop on Burleigh St. in Milwaukee. Barb met her future husband the late Phillip “Phil” Kay at CYPC (Christian Young Peoples Club) dance on his birthday, after he was out of the service. It just so happens that her parents had their wedding reception at a CYPC dance at St. Augustine’s. This is where, Phil gave her his Army ring. They married on November 21, 1970 and had three children: Lori, Steven, and Joseph. Some of her hobbies included playing in a girl’s baseball league and bowling. She was an active member of the VFW Ladies Auxiliary. She was recruited by her sister Carol to work for the State. Later Barb went on to work at Supreme Meats Inc. which she retired from after 30 years. Barb loved to collect angels. Her favorite color was orange. She also enjoyed her visits to Potawatomi and Las Vegas. Her last trip to Vegas was with her daughter Lori and her grandson, Christian for his 21st birthday. Barb enjoyed spending time with family and friends. She was a dedicated mother first and foremost. She treasured her children and embraced every moment with them. She was a devoted grandmother to Christian, Evan, Dillon, and Marley and new great- grandson: Greyson. She is survived by her children: Tony Larke, Lori (Ray) Deverney, Steven (Roz) Kay, Joseph (Marie) Kay, grandchildren: Christian Deverney, Evan Kay, Dillon Kay and Marley Kay; great grandson: Greyson Deverney, siblings: Carol Smith, Nancy (Danny) Zacharias, Janet Smith, Jim (Beverley) Smith, David Smith, also survived by nieces, nephews, other relatives and friends. She was preceded in death by her parents Harold and Veronica (nee Suchorski) Smith and her loving husband of 46 years Philip “Phil” Kay. Special thanks to Aurora Zilber Hospice Care Team. Memorial Visitation Tuesday, June 29 at the FUNERAL HOME from 4:00 to 6:00 PM followed by a Memorial Service at 6:00 PM. Rozga Funeral & Cremation Services Rozga-Walloch Chapel 4309 S. 20th St. Milwaukee, WI 53221

Barbara &#8220;Barb&#8221; Ellen Kay (nee Smith) was granted her angel wings on June 15, 2021 at the age of 72 after a courageous battle with Pancreatic Cancer. She passed peacefully in her sleep at Aurora Zilber Family Hospice. She spent her... View Obituary & Service Information

The family of Barbara E. Kay created this Life Tributes page to make it easy to share your memories.

Send flowers to the Kay family.