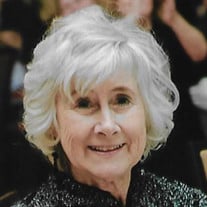 (nee Langseth) Of Franklin, WI, passed away peacefully on December 11, 2020 at the age of 83. Preceded in death by her beloved husband of 52 years, Richard Caswell, daughter Mary Caswell, and brothers Roger and Ronald Langseth. Survived by her children Lori Caswell and Judy (Dan) Gill, grandchildren Sara (Nick) Estes, Natalie (Rob) Bjerregaard, Evan Gill, and Noah Gill, dear sister Marilyn (John) Roberts, brother Larry (Judy) Brodahl, and many relatives and friends. Darlene was born in Minneapolis, MN to the late Eugene Langseth and Effie “Peggy” Christopher. After her parents divorced in the 1940’s she and her sister were raised by foster parents on a farm in Osseo, MN. Darlene was a 1955 graduate of Anoka High School, where she made lifelong friends June, Lois, and Darla. After high school Darlene went to work at Northwestern Bell in Minneapolis. She gave up an accepted job offer to be a stewardess for Northwest Airlines after she met Richard, who was completing his Engineering degree/ROTC program at the University of Minnesota. Upon his graduation and commission into the US Navy, they married on June 28, 1958 and immediately left by train for his Active Duty at Port Hueneme in Oxnard, CA. They then briefly lived in Waukegan, IL until he entered the Naval Reserves, at which point they moved to Milwaukee, WI and eventually settled in Greendale, WI in 1965. The family also temporarily lived in North Kingstown, RI during the last four years of the Vietnam War where Richard was stationed at the Quonset Point Naval Air Station. Darlene enjoyed being a Navy wife. Darlene was an active member of many organizations, including the Greendale Junior Women’s Club, Davisville Officers Wives Club, Greendale American Legion Auxiliary, and the Greendale Historical Society. Over the years she enjoyed her roles as a foster parent, softball coach, Girl Scout leader, foreign exchange student host, and school and public library volunteer. She also took accounting classes at MATC and worked as a bookkeeper for several years. Her many hobbies included sewing, reading, photography, attending concerts, exercise, gardening, dancing, genealogy, and especially travel. Darlene and Richard traveled to all 50 states and many countries, embarked on several scuba diving trips, and enjoyed their timeshare in New Orleans. After their grandchildren arrived she “retired” and was actively involved in their lives and shared her love of travel by taking them and her children on many adventures. Many of their world travels were chronicled beautifully in meticulous trip stories that Darlene enjoyed writing and sharing with others. Family was very important to Darlene, and she was the glue that held the family together. She enjoyed her role as mother, helped organize family reunions, and traveled to Norway and Sweden to meet her relatives. In 2018, after over 70 years, DNA testing led to her being reunited with her baby brother Larry who had been adopted as a young child. Their reunion led to a continued relationship that she cherished, and gave her comfort and closure knowing that Larry was alive and well. Darlene was a capable, tech-savvy, strong-willed, and vibrant person who will be greatly missed. A treasured quote she often shared was “Bloom where you are planted.” The family would like to thank the staff at Layton Terrace, Autumn Leaves of Franklin and Legacy Hospice for their compassionate care for Darlene over the past two years. A celebration of Darlene’s life will be a private family gathering. Private inurnment will be at the Southern Wisconsin Veterans Memorial Cemetery in Union Grove, WI. In lieu of memorials, the family requests that you please consider helping someone in need during this challenging pandemic.

(nee Langseth) Of Franklin, WI, passed away peacefully on December 11, 2020 at the age of 83. Preceded in death by her beloved husband of 52 years, Richard Caswell, daughter Mary Caswell, and brothers Roger and Ronald Langseth. Survived by... View Obituary & Service Information

The family of Darlene K. Caswell created this Life Tributes page to make it easy to share your memories.

(nee Langseth) Of Franklin, WI, passed away peacefully on December...

Send flowers to the Caswell family.