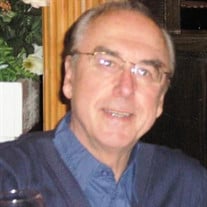 Emil Ruzicka found peace December 24, 2020 at the age of 81 after a long hard-fought battle with ALS. Loving Dad of Peter (Sophie) Ruzicka and Maryann (Sha) McClellan. Brother of Venus and Jana. Preceded in death by parents, siblings and daughter Katherine (Reiner) Schlimbach. Further survived and will be missed by his 5 Grandchildren Kyle, Erica, Andrea, Alex and Gavin. Emil was born in 1939 in Mlada Boleslav, Czechoslovakia escaping Communism and later migrated to the United States where his family eventually found home in Milwaukee, WI. He married Mary Markovic in 1961 and they raised 3 children. Emil dedicated most of his life to his family and retired after 30 years from Bordens Dairy as a Teamster Local 200 Member which involved multiple jobs leading to a career position as the Lab Technician. His passions involved religious theology, authoring several books, fishing, space exploration, physics and being a creative inventor and self-made engineer developing board games, puzzles, and fishing lures. “The Price of Freedom, The Living Scrolls Revealed in Names, The Revelation of XII Minor Prophets, and The Revelation of XII Sons of Jacob” is among his latest books he authored and published signifying his commitment to sharing his life and devotion to God with others. The special thank you to the Heartland Home and Health Services at East Troy Manor for the exceptional care they provided during his entire stay and the exemplary Hospice Care. Thanks to their constant attentive treatment he was comfortable and very peaceful in his final moments and we want to commend this special team of long-term care providers, doctors and all the staff especially during these hard times. In lieu of flowers memorials to East Troy Manor (3271 North St, East Troay, WI 53120) would be appreciated. Visitation Tuesday, December 29 at the Rozga-Walloch Chapel (4309 S. 20th Street, Milwaukee, WI 53221) from 10:00 AM - 12:00 Noon with Funeral Service at 12:00 Noon. Interment St. Adalbert Cemetery.

Emil Ruzicka found peace December 24, 2020 at the age of 81 after a long hard-fought battle with ALS. Loving Dad of Peter (Sophie) Ruzicka and Maryann (Sha) McClellan. Brother of Venus and Jana. Preceded in death by parents, siblings and daughter... View Obituary & Service Information

The family of Emil J. Ruzicka created this Life Tributes page to make it easy to share your memories.

Send flowers to the Ruzicka family.