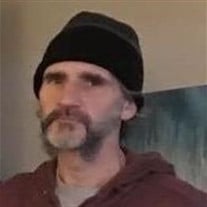 Eric Michael Schimmels, 46, of Milwaukee, passed away at home Wednesday, November 27, 2019. He was born October 1973 in Milwaukee to Stephanie (Susienka) and Michael Schimmels and was the oldest of four children. Eric graduated salutatorian from Whitnall High School and studied engineering at the University of Wisconsin-Madison. Eric was intelligent, passionate, creative and artistic; he knew there was more than Wisconsin, and so he left Madison to follow his dreams. He developed a reputation as a dedicated craftsman and eventually came home to Milwaukee to work as a carpenter. In 2011, Eric became the proud father of an exceptional son, who he spoke fondly of with everyone he met. Eric had a big heart and left an indelible mark on friends and family. He loved music, movies, and especially animals and will be missed by his dog, Fedock. Eric is survived by his parents, Michael and Stephanie of Milwaukee; his siblings JoEllen Schimmels of Vienna, VA; Thaddeus Schimmels of Milwaukee; Meghan (Scott) Sedlar of Burlington, WI; his son Declan Merrick Schimmels of Milwaukee; and many nieces, nephews, aunts, uncles, cousins and friends. In lieu of flowers the family asks to please donate to any one of Milwaukee’s substance use disorder rehab, counseling, or support centers. Eric wasn’t afraid to follow his heart, even when it took him down an unwary path. He has found his way home now and will be greatly missed. Memorial Service Saturday, December 28 at JACKSON PARK LUTHERAN CHURCH (4535 W. Oklahoma Ave) at 1:00 PM. Please share memories/photos below. The family would very much appreciate it.

Eric Michael Schimmels, 46, of Milwaukee, passed away at home Wednesday, November 27, 2019. He was born October 1973 in Milwaukee to Stephanie (Susienka) and Michael Schimmels and was the oldest of four children. Eric graduated salutatorian... View Obituary & Service Information

The family of Eric M. Schimmels created this Life Tributes page to make it easy to share your memories.

Eric Michael Schimmels, 46, of Milwaukee, passed away at home...

Send flowers to the Schimmels family.