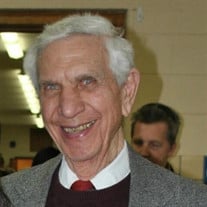 Eugene "Gene" C. Horn was born on January 17, 1929 in Milwaukee, Wisconsin and was born to Edward Horn and Helen Busch of Milwaukee, Wisconsin and passed away on December 30, 2019. He was 90 years old. Gene attended St. Frederick Grade School in Cudahy, WI. He graduated from St. Francis Minor Seminary in 1947. After high school he was employed by Gimbel's department store and Doerman Shoe company, until he was drafted into the Army in January, 1951. He was assigned as a truck driver, mostly transporting prisoners in the Korean War. Upon his return in the summer of 1953, he attended Marquette University College of Journalism and graduated in 1957. Gene became a part time reporter for the Milwaukee Sentinel during his time at Marquette. Some of the highlights of his time being a reporter include: interviewing celebrities such as Robert Mitchum, Jimmy Stewart, and June Allyson. He even had the opportunity to fly with the Blue Angels during a demonstration flight. Gene met the love of his life, Mildred Schneider, in May 1958. On Christmas day that year they were engaged and were married that following August of 1959. He worked briefly as a public relations assistant at International Harvestor Company. Gene and Mildred welcomed their first and only child, Peggy, in August of 1960. Shortly thereafter Gene became the Associate Editor at the Catholic Herald. He retired from his career as an Editor after 38 years, in 1998. Unfortunately, that same year, he lost his dear wife, Mildred. During his retirement, he enjoyed writing a monthly column for the Catholic Herald. He was an avid reader and crossword puzzle enthusiast, as well as an active member of his church, St. Roman Parish. He especially cherished his time with his four grandchildren, Pamela, Devin, Thomas, and Michaelle, and his three great grandchildren, Kalysta, Marshall, and Mason. Gene will be remembered for his zest for life, his passion for journalism, and his devout Catholic faith, but it will be his unending love for his family that will be his lasting legacy. Visitation Monday, January 6, 2020 at ST. ROMAN CHURCH (1810 W. Bolivar Ave) from 4:00 – 6:00 PM followed by a Celebration of Mass of Christian Burial at 6:00 PM. Entombment Tuesday, January 7 at St. Adalbert Cemetery at 12:30 PM. Please meet at the office.

The family of Eugene C. "Gene" Horn created this Life Tributes page to make it easy to share your memories.

Send flowers to the Horn family.