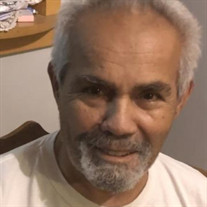 Sunrise: 1939 and Sunset: Monday, May 24, 2021. Gilberto passed away peacefully, at 4:02 a.m. at home surrounded by his family. Preceded in death by his parents, Andre and Marcelina, his beloved wife Virginia (nee Heatherly), all of his siblings, his granddaughter Stephanie Alexis Matias, and great-granddaughters Ciera Enis Rabell, and Isabella Gina Mendez. Gilberto is survived by his 9 children, 36 grandchildren, and 51 great-grandchildren. Further survived by his sisters-in-law Juana De Jesus and Meri, many nieces, nephews, other relatives and friends. Born in San Lorenzo 81 years ago to Andre Alverio and Marcelina Mercado where he lived until 1956. At age 17 he moved to Chicago, where he met the love of his life and sweetheart Virginia lee Heatherly. They were married August 7, 1961 and started a family. They had 9 children; Gilbert Jr., Jeannette (the late Antonio Sr.) Rabell, Yolanda (the late Ubencio Sr.) Alvarez, Rosa Iris, Roberto (the late Diana), Carolyn, Damari, William (Laura) ,and Josue (Michelle Mims). In January 1976 the family moved to Milwaukee, Wisconsin and have resided in the area ever since. He accepted Christ as his personal Savior in 1974. He went to Bible Institute and graduated in 1977. He was recognized many times in his church for various achievements, He was a Co-pastor for a few years. He preached the Word and assisted with anything the church requested of him. He wanted to be remembered for knowing the bible, and living by the word of God. His most favorite sport was fishing. He could fish all day every day. Anybody who came to go fishing with him became a good friend. That is how he met Neil and became lifelong friends. He and Neil fished all the time in his last few years. Gilberto’s pride was his grandchildren. He loved it when they would come over to play his favorite game of Dominoes and cook out on the grill. Gilberto worked as a security aide in the parks on the South side of Milwaukee, where he then transferred to M&I Bank. He was a dedicated employee and constant fixture at M&I Bank for over 29 years. This is where he built lifelong friendships with many co-workers and turned acquaintances into friends. Gilberto was known for his constant smile. That smile was there to greet you at the bank any day of the week. Visitation Tuesday, June 1 at the Rozga-Walloch Chapel (4309 S. 20th St, Milwaukee, WI) from 4:00 to 7:00 PM followed by the Funeral Service at 7:00 PM. Additional Visitation at the Funeral Home Wednesday, June 2 from 11:00 to 11:30 AM for final viewing. Interment Arlington Park Cemetery.

Sunrise: 1939 and Sunset: Monday, May 24, 2021. Gilberto passed away peacefully, at 4:02 a.m. at home surrounded by his family. Preceded in death by his parents, Andre and Marcelina, his beloved wife Virginia (nee Heatherly), all of his siblings,... View Obituary & Service Information

The family of Gilberto Alverio created this Life Tributes page to make it easy to share your memories.

Send flowers to the Alverio family.