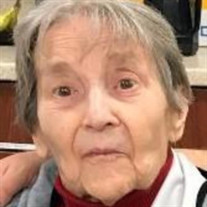 (nee Hebenstreit) Born to Eternal Life February 8, 2022 at the age of 95 years, where she now enjoys the company of her beloved husband David (d. 2014) and her youngest son Alex (d. 2015). Maria is survived by her eldest son Randall (Mary). Maria also continues to live on in the memories of all those who had the fortune to know her. Maria was born Maria Hebenstreit in the town of Hollabrun, Lower Austria, in 1926. Maria grew up during a turbulent time, working as a nurse in the second world war. In the immediate post-war period Maria was forced to flee the Russian occupation of eastern Austria, and with her English language skills, she made her way on foot to Vienna, Austria, where she found employment with the British armed forces as a clerk. In Vienna, Maria then worked her way thru college, achieving a PhD from the University of Vienna in 1957. In 1959 she visited Chicago to see her sister Rose Resele. Maria decided she liked life in America, and ended up in Milwaukee around 1960, having secured employment as a professor at Marquette University. At a fateful academic cocktail party in 1961, Maria met David Randall Luce, a newly minted professor at the University of Wisconsin-Milwaukee. Maria and David hit it off, marrying in 1962, having two children, and staying married until David’s passing in 2014, a span of 52 years. Maria, like David, shared a keen sense of outrage at civil injustice, with Maria in particular being a fierce advocate of education for all regardless of race or creed. Maria was an activist by example, never afraid to go where she could help, whether it was attending community meeting in Milwaukee’s inner city or volunteering to serve food at Saint Benedict the Moor’s community kitchen. Even a mugging did not stop her – if anything it gave her further impetus to continue her many volunteer activities. After a long life of kind service, Maria and David enjoyed a well-deserved retirement in 2011. At the Milwaukee Catholic Home, while suffering from the onset of dementia, she still continued to embrace life, and was a warm presence for her family, friends, and caregivers. Eventually though, time caught up to Maria, and she passed away peacefully, in the presence of loved ones. Memorial Visitation will be held Saturday, February 19 from 11:00 – 12:00 Noon at ROZGA FUNERAL & CREMATION SERVICES – ROZGA-WALLOCH CHAPEL (4309 S. 20th St, Milwaukee 53221) followed by a Memorial Service at 12:00 Noon. Private inurnment at Southern Wisconsin Veterans Memorial Cemetery, Union Grove.

(nee Hebenstreit) Born to Eternal Life February 8, 2022 at the age of 95 years, where she now enjoys the company of her beloved husband David (d. 2014) and her youngest son Alex (d. 2015). Maria is survived by her eldest son Randall (Mary).... View Obituary & Service Information

The family of Maria Hebenstreit Luce created this Life Tributes page to make it easy to share your memories.

Send flowers to the Luce family.