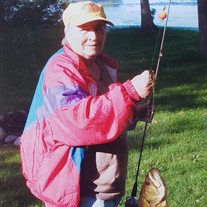 (nee Klima) Reached the end of her wonderful life on Earth, and the beginning of her journey in Heaven on Tuesday, April 13, 2022 at the experienced age of 92. Rita lived most of her life in Milwaukee, WI. Born there in November 1929 to Frank and Margaret Klima, she was the fourth of six children. It was also there, in Milwaukee, at a YMCA dance that she met her husband Perry. The two of them raised their 10 children in a little yellow house in Milwaukee, and participated in the lives of their grandchildren, before moving to Muskego, WI. Rita and Perry were married in June of 1952 and would have celebrated their 70th wedding anniversary this year. Rita loved fishing, reading, playing solitaire and rummy, and spending time with her family. She loved a bargain and was the world’s best rummage sale haggler—often negotiating an item marked for a quarter down to a nickel—and champion of smuggling every cracker packet out of the restaurant that came with the soup. She was clever, resourceful, and a commanding force. She hated being told what to do and wasn’t afraid to speak her mind or curse when she deemed it appropriate, including her infamous (and often) exclamation of “Shit green!” which to this day no one knows the original origin or invention of the phrase. In her final years, Rita endured short-term memory loss that prevented her from being able to create and maintain memories for more than a few minutes at a time. However, despite this she still was still the formidable, strong-willed woman she always was, and the most important things remained until the very end: her unwavering love for her family. She is survived by her loving husband, Perry, as well as her 10 children: Mike (Wendy) Fujinaka, Steve Fujinaka, Pat (Debbie) Fujinaka, Tim (Janet) Fujinaka, Bill (Michele) Fujinaka, Julie (Mark) Kowalski, Tom Fujinaka, John Fujinaka, Lori (Steve) McCowen, and Joe (Cathy) Fujinaka, as well as her brother, Tom Klima, and many, many, MANY grandchildren, great-grandchildren, and a great-great-grandchild. She is further survived by her grandchildren Nikki (Shawn) Hendricks, Matt (Christine) Fujinaka, Chris (Jackie) Fujinaka, Thayer (Sari) El-Dajjani, Mandy Bright, Seth Fujinaka, Chelsea Fujinaka, Joe Fujinaka, Shannon Fujinaka, Jody (Nathan Gerics) Fujinaka, Nick (Rebekah) Fujinaka, Adam Kowalski, Cody Ramsey, Justin Ramsey, Andrew Fujinaka, Crystal Coyhis, Nicole Hoffmeyer, Jessie Fujinaka, Josh Fujinaka, Amy (Brett) Borchart, Christie (Brandon) McCowen, Tyler Fujinaka, Jamie (Jake) Fujinaka, and Jordan Fujinaka; and was a loving great-grandmother to Hailey, Madeline, Cameron, Mikey,Macey, Merrick, Mylie, Faith, Ty, Laith, Nabila, Nikki, Daisy, Daniel, Valerie, Kaitlyn, Ayden, Evan, Brayden, Genevieve, Fiona, Nora, Clara, Bailee, and Bain; as well as great-great grandmother to Mathias. She was greeted in Heaven by her parents and siblings and their spouses, Dorothy (Donald) Hebel, Richard (Jean) Klima, Frank (Dorothy) Klima Jr, Thomas Klima, and Daniel Klima. Beloved wife, mother, grandmother, sister, aunt and friend, Rita loved fiercely, and her loved ones take comfort in knowing that she is now at peace. Memorial Visitation Saturday, April 23 at ST. LEONARD CHURCH (W173S7743 Westwood Dr., Muskego) from 9:30 – 10:45 AM followed by a Memorial Mass of Christian Burial at 11:00 AM. Inurnment St. Joseph Cemetery Waukesha, WI. Reception to follow. Rozga Funeral & Cremation Services Rozga-Walloch Chapel 414-281-7145

(nee Klima) Reached the end of her wonderful life on Earth, and the beginning of her journey in Heaven on Tuesday, April 13, 2022 at the experienced age of 92. Rita lived most of her life in Milwaukee, WI. Born there in November 1929 to Frank... View Obituary & Service Information

The family of Rita R. Fujinaka created this Life Tributes page to make it easy to share your memories.

(nee Klima) Reached the end of her wonderful life on Earth, and...

Send flowers to the Fujinaka family.