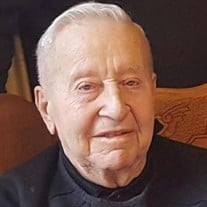 Robert Zanoni Age 91, of Milwaukee, passed away peacefully on Saturday, September 5, 2020, at a local memory care facility. He was born in 1929 in Vulcan, Michigan, son of the late Innocente and Enrica Zanoni. He married Sally Ann Johnson on June 22, 1957. Shortly thereafter, they moved to Milwaukee and started their family. Robert graduated from Michigan Tech with a degree in Metallurgical Engineering and then joined the US Army and served for two years. Following his discharge, he was employed as an Metallurgical Engineer at Ladish for 35 years where he designed and tested parts for airplanes and space shuttles for NASA. He not only earned a degree at Michigan Tech, but he also developed his interest and passion for ice hockey. When he heard about a team trying to organize at Wilson Park, in Milwaukee, he started volunteering his time working with the Milwaukee Wings which eventually became the Milwaukee Admirals. He served in a variety of volunteer positions for the Admirals for 48 years when, at 89, a broken hip forced him into ‘retirement’. In addition to hockey, he was passionate about watching his children and grandchildren participate in the sports of their choice which included football, baseball, basketball, volleyball and, of course, hockey! He enjoyed following the Packers, Brewers, and Bucks and watching ANY hockey game he could. Retirement allowed him to foster his vegetable gardening skills and golf skills which resulted in some delicious tomatoes and a couple of hole-in-ones on the links. His family, career and love of hockey allowed him to make numerous good friends throughout his life. Whether it was a card game, a neighborhood party, a business trip, or a round of golf, he knew how to have fun and enjoy his time with family and friends. He was known for his Bloody Mary mix, which he named ‘Uncle Bob’s #321’ claiming he tried 320 recipes before he got it right, and his Old Fashioned's. His faith was strong so he rarely missed mass at St. Romans Catholic Church where he was a member for 60+ years. He was a very active man heading to the local fitness center every morning until a fall at 89 sidelined him. The last couple of years kept him at home more than he liked, but he was still able to feed the birds daily and enjoy a good cigar throughout the day. He was preceded in death by his wife, Sally; his brothers Henry, Victor and Herman; his parents Innocente and Enrica Zanoni; his brothers-in-law Robert Johnson, Larry Johnson, Frank Curiel, Roger Anderson, Bert Whitford, Chuck Flink; his sisters-in-law Angie Zanoni, Chris Zanoni, Rita Anderson, Lois Whitford, Verna Johnson, Nancy Curiel and Joan Flink; his niece Rosemary, and son-in-law to be, Greg Dzievit. He is survived by his three daughters: Deborah Zanoni (Jim Pullen) of Elk Mound, WI, Cynthia (Kurt) Knoebel of Franklin, WI and Laura Zanoni of Greenfield, WI; three sons: Mark (Linnmarie) Zanoni of South Milwaukee, WI, Gary Zanoni of Milwaukee, WI, and Dean (Julie) Zanoni of Milwaukee, WI; grandchildren: Robert, Lindsey, Andrew, Kelly, Amanda, Hannah, Hayden, Harrison, Hunter, Aaliyah, and Jessie; four great grandchildren: Brooklyn, Brock, Mason, and Payton; sisters-in-law Susie (David) Oberthaler and Marybelle Johnson; goddaughter, Lisa Uherick and numerous nieces, nephews, and friends. In lieu of flowers, memorials to the Youth Hockey Helpers Foundation (P.O. Box 210062, Milwaukee, WI 53221) are appreciated. Due to Covid-19, the family encourages friends to share their condolences online and/or view the Live Streamed Funeral Service located directly on the Funeral Home website. For those that feel the need to share their condolences in person, please wear a mask and practice social distancing. Visitation Saturday, September 12, 2020 from 9:00 to 10:50 AM at the FUNERAL HOME. Private Funeral Services to follow. Private Entombment St. Adalbert Cemetery. Rozga Funeral & Cremation Services Rozga-Walloch Chapel 4309 South 20th Street Milwaukee, WI 53221

Robert Zanoni Age 91, of Milwaukee, passed away peacefully on Saturday, September 5, 2020, at a local memory care facility. He was born in 1929 in Vulcan, Michigan, son of the late Innocente and Enrica Zanoni. He married Sally Ann Johnson on... View Obituary & Service Information

The family of Robert Zanoni created this Life Tributes page to make it easy to share your memories.

Age 91, of Milwaukee, passed away peacefully on...

Send flowers to the Zanoni family.