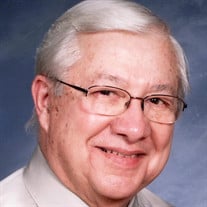 Cherished husband, devoted father of five, and grandfather of nine—passed away peacefully on December 30, 2020 at the age of 89. Ron was born in 1931 in Milwaukee just minutes before his identical twin brother, Robert. Ron was a proud Milwaukeean and lived all but a few years of his life in the city. Ron met Arlyne Rappl, his beloved wife of 66 years, while studying at Marquette University, and the two raised a large, happy family of four sons (Richard, Michael, William, and Thomas) and one daughter (Ann). After starting a career as a radio DJ in the 1950s, Ron settled into work as a public affairs officer for the local IRS office. Despite his transition to a desk job, Ron never lost his passion for radio broadcasting; for many years in his retirement, he and Arlyne hosted a weekly radio show in Rhinelander, WI, featuring his favorite big band hits. When he wasn’t on the radio, Ron enjoyed sunset cruises on the peaceful waters of Found Lake in the Wisconsin northwoods, where the family had a vacation home for many years and where Ron taught many children to catch panfish from the pier. A decades-long member of the tenor section of his church choir and avid clarinet player, Ron brought joyful music into his home and into the lives of his community members. He is remembered as a generous, patient, and gentle man who appreciated order and organization in everything, the beauty of a well-made Manhattan, and an evening of Sheepshead with the family. Ron was preceded in death by his mother (Mabel Zimmer), father (Frank Fleissner), brothers (John and Robert), and sister (Joan). He is survived by his wife (Arlyne), his brother (Franklin), his five children—Richard (Christine), Michael (Cyndy), William, Thomas (Linda), and Ann (Robert)—his nine grandchildren (Stephanie, Joseph, Benjamin, David, Katherine, Elizabeth, Gregory, Zola, and Clio), and six great grandchildren (Mason, Owen, Henry, Avery, Bennett, and Charlotte). In lieu of flowers memorials to St. Anne’s Salvatorian Campus (https://www.stannessc.org/Donate.html) would be appreciated by the family. Public visitation will be held Wednesday, January 13 from 10:00 to 10:30 AM at the Rozga-Walloch Chapel (4309 S. 20th St, Milwaukee, WI 53221). With concern for the safety of all during this time of Covid the Mass of Christian Burial will be privately held at Mother of Good Counsel Church and will be able to be viewed on a livestream at facebook.com/MGCPCC on Wednesday, January 13 at 11:30 AM and following the Mass on Ron’s Tribute Obituary page on the Funeral Home Website. Private interment will be held at Southern Wisconsin Veterans Memorial Cemetery.

Cherished husband, devoted father of five, and grandfather of nine&#8212;passed away peacefully on December 30, 2020 at the age of 89. Ron was born in 1931 in Milwaukee just minutes before his identical twin brother, Robert. Ron was a proud... View Obituary & Service Information

The family of Ronald A. "Ron" Fleissner created this Life Tributes page to make it easy to share your memories.

Cherished husband, devoted father of five, and grandfather of...

Send flowers to the Fleissner family.