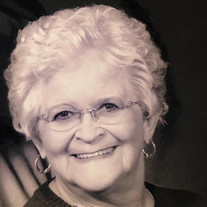 Ruth Elvira Genke (nee Keranen) Passed away peacefully with family present October, 6 2019 at the age 89. She was born 1929 as Ruth Keranen in Onela,MI. Which is located in Michigan’s UP. Raised on a farm, one of eight children. After graduating high school, she left for Detroit, and then Denver where she worked as a waitress and met her first husband, Roy French. She was married to Roy 12/19/53 in Chillicothe, Ohio. They moved to Philadelphia where Roy earned his MBA at Wharton School of Business. They drove across Canada to San Francisco, CA where Roy started at Bank of America. Their son Steven was born in San Francisco,CA and their son Frank in Modesto, CA following a job transfer with the Bank. Moving back to San Francisco,CA they bought their first house in Mill Valley, CA. In 1960 they were transferred again to Lagos, Nigeria for 4 years, and then to Izmir and Istanbul Turkey for 5 years. Roy died there in 1969, and Ruth and the boys moved back to Houghton, MI where she lived for 17 years. She worked for a Doctor’s office and in Home Care. She met Richard Genke on 7-4-1985, and they were married on 6-28-1986. Richard retired from the Wisconsin Gas company and they lived in Oak Creek, WI. She inherited 4 wonderful step-kids Rickie, Craig, Kim and Keri. She leaves behind sister Gloria (Jack) Bellack, Bertha Karsama, and Margaret (Ted) Blom, sons Frank French and Steven (Cathy) French, and dear grand-daughter Jessica French, Rickie (Rich) Gensler, Craig (Cheryl) Genke, Kim Genke, and Keri (Jason) Dahl. Step grandchildren Corey Lancaster, Stacie Lancaster, Christopher Torres, Amber (Aaron) Stadler, Kelly Genke, Skylar Stelter & Preston Dahl, one great-grandson Austin Lancaster and many nieces and nephews. Preceded in death by sisters Mildred Ravi, Helen Johnson and Lillian Karsama, and brother Rudy Keranen. The family will receive relatives and friends for a Memorial Visitation Friday, October 25 from 10:00 to 11:00 AM at FRANCISCAN VILLA – GARDENS CHAPEL (3601 S Chicago Ave, South Milwaukee, WI 53172) followed by a Memorial Service at 11:00 AM to honor her life

Ruth Elvira Genke (nee Keranen) Passed away peacefully with family present October, 6 2019 at the age 89. She was born 1929 as Ruth Keranen in Onela,MI. Which is located in Michigan&#8217;s UP. Raised on a farm, one of eight children. After... View Obituary & Service Information

The family of Ruth Elvira Genke created this Life Tributes page to make it easy to share your memories.

(nee Keranen) Passed away peacefully with...

Send flowers to the Genke family.