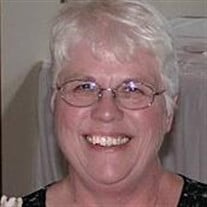 Shirley Kay Jensen August 1947 to 21 September 2021 Shirley died peacefully at Lawlis Family Hospice in Mequon WI on September 21, 2021 at the age of 74. Her death followed her valiant effort to recover from a fall at home that resulted in fractures and a series of surgeries, hospitalizations, and rehabilitation. She amazed all who witnessed the last five months with her continual sense of humor, ability to accept greatly reduced mobility, patience with caregivers and therapists and her loss of independence. Her last days were blessed with comfort and tender care. Shirley was preceded in death by her parents, Arthur and Eleanor Jensen and her husband, Robert Bremer. She is survived by Robert’s grandson, Thomas Bremer Jr, who she and Robert adopted, Tom’s daughter, Aeva Fiveysky and Robert’s granddaughter, Sylvia Czornyj. Shirley is the beloved sister-in-law of Debbie Zylka and Kathy, Mike and Pat Bremer. She is further survived by niece Laurabeth Belter and nephews Phillip Belter and Daniel Bremer. Shirley will be deeply missed by her good friends Ruth Ann Berkholtz and family, Bruce and Kathy Erdman, Jared Erdman, Cheri Jeffery, Mary Kleist, Mary Porter and her Carroll College sisters in the Alpha Xi Delta sorority. She leaves behind scores of fellow teachers at Mukwonago High School and Alverno College, students across many decades, volunteer friends at the National Alliance on Mentally Illness and many neighbors and friends. Shirley’s life will be celebrated at Wisconsin Memorial Park 13235 W Capitol Dr, Brookfield, WI 53005 Chapel of the Flowers and Lounge Wednesday, September 29, 2021 Visitation: 1-2 PM Service: 2 PM Entombment to follow Service Friends and family are invited to gather in the lounge for refreshments Masks and social distancing are respectfully encouraged. In lieu of flowers, contributions can be made to: Milwaukee County Library Foundation Ascension Lutheran Church-Milwaukee Lutheran Immigration and Refugee Fund Shirley lived in Milwaukee her whole life. The beloved daughter of Art and Eleanor Jensen, she attended Custer HS on the northside. After graduating in 1965, she received a scholarship to Carroll College where she earned a BA in English and Education in 1969. Her wide range of friends included those in Alpha Xi Delta sorority, who remained friends throughout her life. Shirley began her teaching career as a middle school language arts teacher in Milwaukee Public Schools for several years. She then accepted a position for the Mukwonago Area School District in their high school. During summers, she continued her own education. In 1974, Shirley earned a Master’s Degee in Reading from Cardinal Stritch University, while also earning credentials for the school administrator license. The majority of Shirley’s teaching career was at Mukwonago Area School District where she served as director of the At Risk Student Program. She was dedicated to helping every student reach their potential and trained other educators at national conferences. Following her retirement from Mukwonago, Shirley assisted with student assessments at Alverno College and taught classes at other colleges in the area. A recipient of the NAMI of Greater Milwaukee Volunteer Award, Shirley also contributed many hours as a volunteer facilitator for NAMI’s Family to Family classes. These support groups were designed to help those who had family members with chronic mental illnesses. This work was very important to her. Shirley married Robert Bremer in December 1977. In the ‘90’s, Bob and Shirley became parents of Bob’s 4 year old grandson, Tom, and later adopted him at age 11. When Tom’s daughter, Aeva was born, Shirley and Bob participated actively in her care until 2015. Bob died in August 2018, after years of declining health, during which Shirley was his caregiver. Before the demands of parenting children of two different generations and Bob’s chronic illnesses, the couple enjoyed traveling around the US, collecting antiques, and spending time at their camper near the Dells. Shirley was a lifelong reader and loved mysteries, especially the Louise Penny “Three Pines” series. She and Robert regularly enjoyed the Milwaukee Symphony and she loved Milwaukee Repertory plays with friends. She had an easy time being around many types of people and made friends with her sense of humor and constant readiness to listen and support the people she cared about. Political discussions were always of interest to Shirley who supported social justice programs whenever possible. Shirley’s ability to roll with life’s many punches was remarkable and will be sorely missed by those who love her.

Shirley Kay Jensen August 1947 to 21 September 2021 Shirley died peacefully at Lawlis Family Hospice in Mequon WI on September 21, 2021 at the age of 74. Her death followed her valiant effort to recover from a fall at home that resulted in... View Obituary & Service Information

The family of Shirley Kay Jensen created this Life Tributes page to make it easy to share your memories.

Send flowers to the Jensen family.