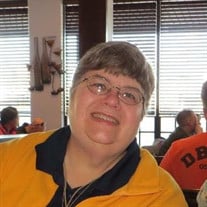 Suzanne L Ratkowski passed away January 9, 2020 at age 69. She was preceded in death by her parents Casimir and Esther Ratkowski, and her sister Cheryl (Ratkowski) Ralph. She is survived by her brother-in- law Scott A. Ralph and wife Mary; nephew Scott E. Ralph, his wife Alissa and their two children, Nolan and Ella; Niece Kerri Jo (Ralph) Cunningham and her husband Ryan and their two children, Hannah and Megan; Cousins Karlene (Ratkowski) Sillmann, Patrick and Michael Ratkowski and Jerry Molenda; other relatives and many friends. After graduating from Notre Dame High School, Sue attended Marquette University where she earned her Bachelor of Science degrees in physics and math in 1972. She completed her Master of Business Administration degree in 1986. In 1974 while in graduate school Sue began working part-time for UPS. She was quickly promoted through the ranks to truck driver, Industrial Engineering supervisor, and manager. In 1985 she was relocated from Milwaukee, WI to Louisville, KY as UPS began its air hub expansion. Over the next years she was part of the Operations Research department, and as a project manager responsible for technology development projects. In 1992 she was promoted to Division Manager of the Yechnology and Planning department. In 1998 Sue became the Systems manager of UPS’ Transportation Technology Group. Sue retired from UPS in 2007 with 33 years of service. Her approach toward her work and success was to “work hard and with integrity and treat people with dignity and respect while always working to help them reach their highest potential.” In 2003 Sue was recognized by Presentation Academy, with the Tower Award for her service and support of the school. In 2010 Sue received the Distinguished Alumna of the Year Award from Marquette University. During her career and and in retirement Sue has worked with Marquette University, United Way, and Presentation Academy helping to provide opportunities to others. Sue believed that there was no limit to what individuals could accomplish when they work with and build up other people. Sue spent her life living out this belief. Visitation Saturday, January 18 from 9:00 to 10:00 AM at Gesu Catholic Church (1145 West Wisconsin Avenue Milwaukee, WI 53233)(Please use parking lot J, see below for more infomration) followed by Mass of Christian Burial at 10:00 AM. Entombment St. Adalbert Cemetery. A Memorial Service will be held for Sue in Louisville, KY at Presentation Academy (900 S. 4th St., Louisville, KY 40203) on January 23rd at 2:00 PM. In lieu of ﬂowers please make donations to Presentation Academy (861 S. 4th St., Louisville, KY 40203). PARKING INFORMATION Free parking is available immediately adjacent to the Parish Center and church in Lot J. The entrance to the lot is on 11th Street south of Wisconsin Avenue.

Suzanne L Ratkowski passed away January 9, 2020 at age 69. She was preceded in death by her parents Casimir and Esther Ratkowski, and her sister Cheryl (Ratkowski) Ralph. She is survived by her brother-in- law Scott A. Ralph and wife Mary; nephew... View Obituary & Service Information

The family of Suzanne L. Ratkowski created this Life Tributes page to make it easy to share your memories.

Send flowers to the Ratkowski family.